This webpage defines some of the bicycle industry terminology

The following is a list of bicycle words used in the bike industry. If you are a a novice this glossary may help you learn how to refer to the parts on your bike. This will help when ordering bike parts or when repairing your bike.

1. Crank the arms that pedals bolt to. You can have 1pc which are the least expensive, 2pc or 3pc. The 2pc and 3pc are the best quality and found on more expensive bikes found in bike shops not department stores. On a 2pc crank, the axle (spindle) is attached to one of the crank arms while 3pc cranks have 2 crank arms and a spindle. Most 2 and 3pc cranks are made of aluminum, while 1pc cranks are steel.

2. Stem is the clamp that hold the handlebars. The stem is sometimes called gooseneck or neck. There are many sizes and lengths of bicycle stems. The clamping size tells you the size of the handlebar it will clamp to. For example, 22.2mm is a common handlebar clamp size. Some stems are shafted type and others are the newer aheadset type.

3. Derailleur This part does the shifting needed on the rear wheel. This is also called a shifter. There are front and rear derailleurs that clamp to the bicycle frame. This bike part makes the bike change gears which enables the rider to pedal harder or easier depending what is needed for the terrain.

4. Saddle is the part of a bike that you sit on. It is commonly called a bike seat. Bike seats can be different for many different types of bike. For example, BMX seats are either padded or plastic. Mountain bike seats can be big or small, vinyl or leather. Bike seats can have rails underneath the seat for attachment or can be pivotal. Pivotal seats are common for newer BMX bikes. Railed seat are common for older BMS bikes, road bikes and mountain bikes. Railed seats can use seat guts or a seatpost called a micro-adjust. The micro adjust seatpost does not use the seat rail guts because its built in to the seatpost.

5. Rim is the outer hoop of a bicycle wheel (see additional entries for tires, spokes and hubs). On a automobile, the rim refers to the entire wheel. The bicycle rim is made of steel, aluminum or carbon fiber. Steel is the heaviest type of bike rim and carbon is the lightest. The lightest parts are found on the most expensive, best quality bicycles. Rims can have many different spoke hole drillings. A 36 hole rim is the most common. The more the spokes the stronger the rim. The less the spokes the lighter and less strong the rim is. Rims can also be single, double or even triple wall. The strongest of these is triple wall and not very common. Since speed and air resistance is a factor when designing bicycle rims they can be shaped for style or reduced air resistance. Aerodynamic rims are found on BMX Racing bikes and Road racing bikes like seen in the Tour de France. A more square rim structure is found on most bikes including Mountain, Retro BMX and Freestyle bikes. Rims with spokes, built up on a hub make a complete wheel.

6. Sprockets are also called gears or chainrings. A single speed bike has 2 sprockets. One in the front and one in the rear. Sprockets come in various sizes and can be changed according to the riding terrain or the relative strength of the rider. For example if its too hard to pedal a bike rider may decrease the number of teeth on the front sprocket form, for example 44T to 43T. Sometimes the difference between winning and losing a bicycle race is the fact that the winner chose a gear that was more efficient for speed. Sprockets that can be easily changed out are called chainrings because of the chain ring bolts that attach to the sprocket spider. On cheaper bikes that use a solid sprocket, you have to remove the crank to replace the sprocket. A chainring is more preferred for ease of installation. Low cost sprockets are made of steel and higher priced quality sprockets are made of aluminum. The most common chainrings can have either a 4 or 5 bolt pattern. This bolt pattern is referred to as the BCD. For example, a BMX 4 bolt chainring is 104bcd and 5 bolt is 110bcd. 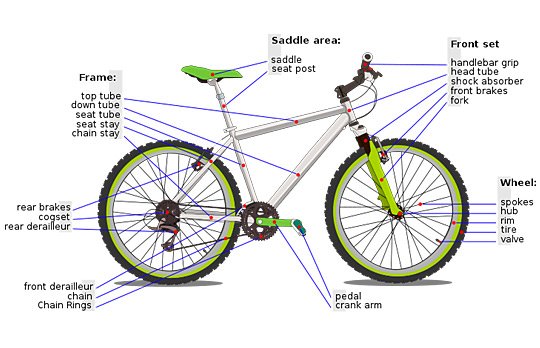